I have a ritual in the morning, and it involves being very quiet.

My six flatmates are all Norwegian, which surprised me. The student housing complex I live in is one city block full of twenty identical three-floor buildings.

I occupy one small dorm room (with its own tiny bathroom) on one floor with six other people, we share a kitchen and common area. 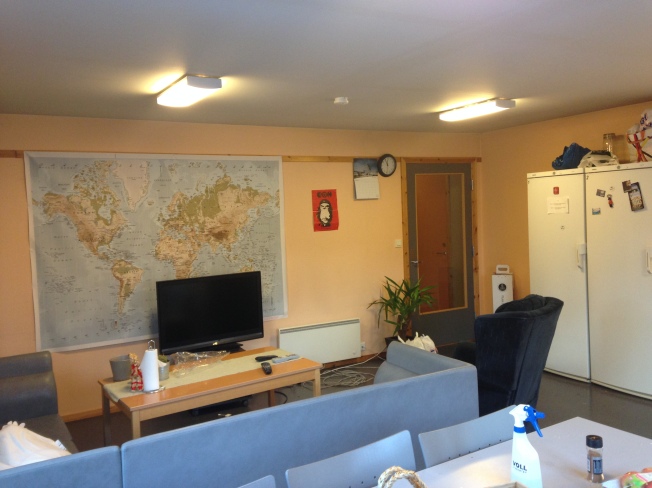 The large apartment on the end is a self-contained studio, with its own kitchen. The people who live there are the “others”. I have never seen them, but I know they exist.

I am told that there are other international students in the complex, but that most residents are undergraduate Norwegian students from outside of Trondheim. I was also told, for those who followed my missing bed saga, that the administration used to supply beds for all residents, but they had an infestation of bed bugs two years ago. Wish they would have made that clear when I signed the lease. All it read was that my room was “equipped.” Credit card and IKEA to the rescue. As a sidenote I am terribly glad they supply instructions, or I might not have figured out how to unroll my mattress.

But back to my morning ritual.

Because my flatmates are all in their early twenties, they sleep rather late, until noon, most days, unless I hear one leave for class. They do not, as a rule, wake up early and have leisurely breakfasts, as I like to do. Any food they prepare in the kitchen begins in the late afternoon.

The kitchen is a wide open space, and sound carries down the hall. I am concerned with making noise in the morning, especially as I am now more or less adjusted to my domestic schedule of going to bed around midnight, and waking up around eight, hours before the younglings begin to stir.

In order not to rouse them too early, I sneak into the kitchen soon after waking, and shut the door behind me. That at least muffles the sound. I carefully open drawers for dishes and cutlery, preparing breakfast. The cupboard is eased open, then shut slowly. The plate coaxed out of a shelf and placed on the counter with the minimal of aural disturbance. The toast buttered with a knife that I dare not clang in the sink. I then squirrel away to my room to eat the food and drink my morning coffee as a get ready for the day.

Don’t wake the babies, I laugh to myself.

Mostly, I do this so as not to miss the light. It is rather easy to lounge around, as I have no fixed schedule and my work is done at any time of the day. But if I leave the house around lunchtime, it is already getting dark. I don’t fear for my safety walking after the sun goes down, but I am just now navigating with confidence. Daylight helps. And the pictures are nicer too.

This week, I went to Kristiansen Fortress, on a hill near the city center. Every time I take a long walk a choose a different route. I can now visualize the Trondheim map, and can usually place my movements within it. Learning street names is still a struggle, as there are difficulties grasping the nuances of a non-Latin-based language. Spanish, Italian, and especially Portuguese come rather easily to me, as I speak French. But I have not yet been able to intuit the Scandinavian languages; I am reading the Latin alphabet with the Latin-based language map I have in my head, and it is interfering. The vowels are longer. The emPHAsis is placed on a different sylLAble. Some re-wiring is required.

When you travel alone to foreign countries, you have to get over any shyness at speaking to strangers. I have asked for directions and instructions many times, as there is no signage in English: do you think you can tell the difference between clothes detergent, fabric softener, and other cleaning agents when the brand names are not recognizable, and images on the container are ambiguous or non-existent? Similar problems arise in the grocery store, so I carry a list of translated words indicating my food allergies. That list has now grown with other items: smør = butter; fløte is cream, not coffee cream nor whipping cream, but a thick cream used for baking which most Montreal grocery stores do not sell; kjøtt is meat, but I’m never sure which kind when it often comes processed as dry sausage or lunchmeat. Though, I’ve never been disappointed.

Horseporcbeef is delicious any way you slice it.

As I now am more or less settled I am looking into traveling North to the arctic circle in order to see the Northern Lights–more on that as I research the cheapest way to make this happen.

In the meantime, here are some photos from my trip to the Fortress. 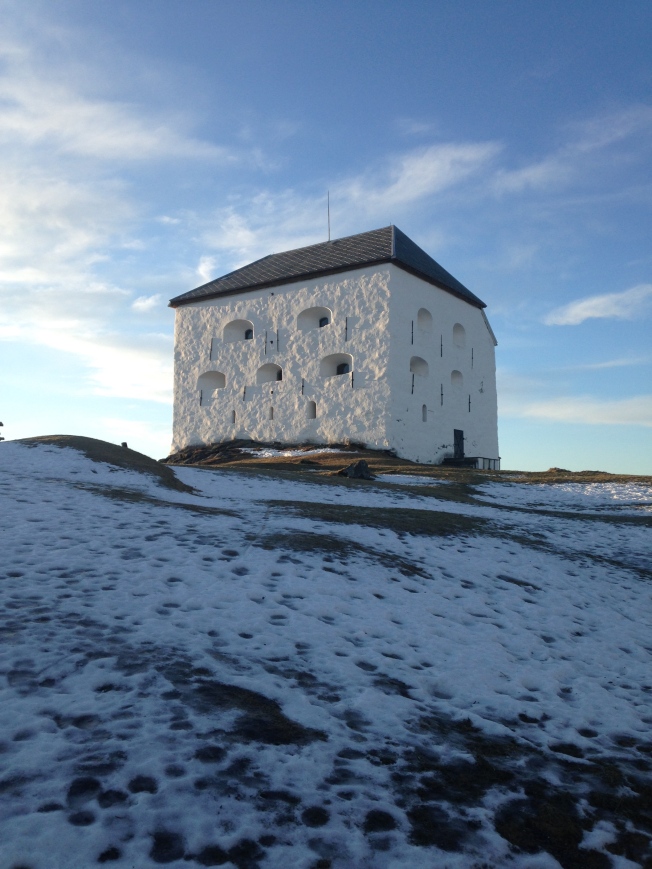 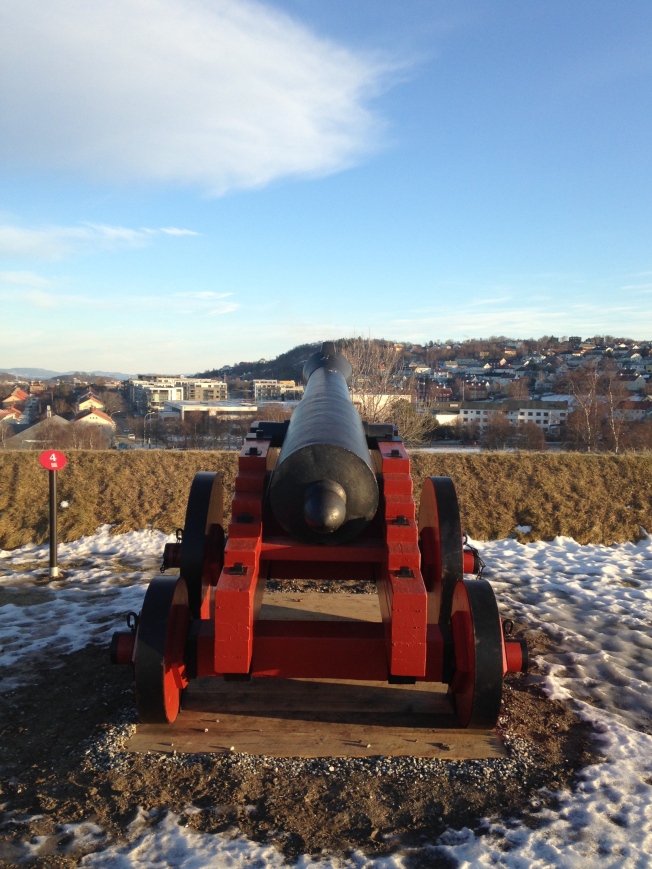 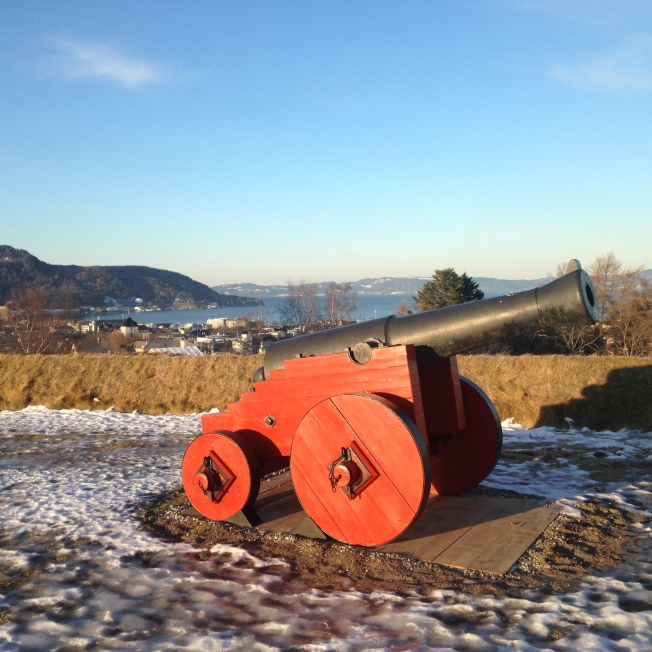 The body of water in the background is the Trondheim Fjord. 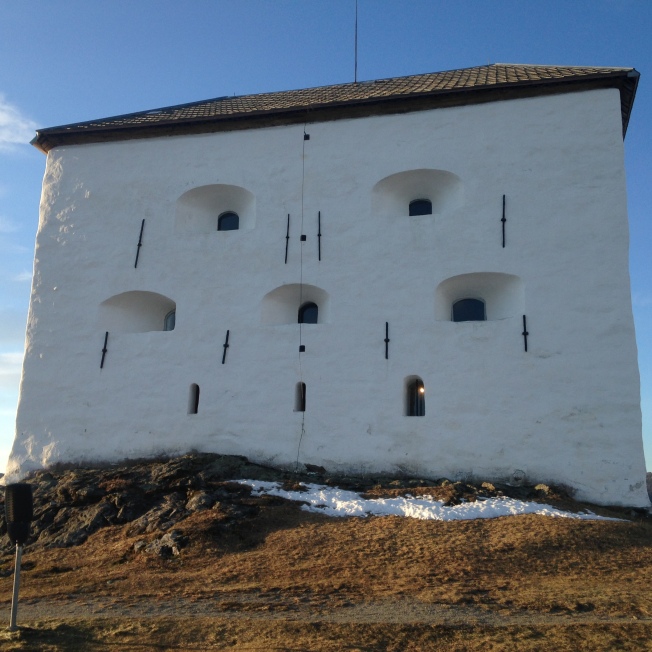 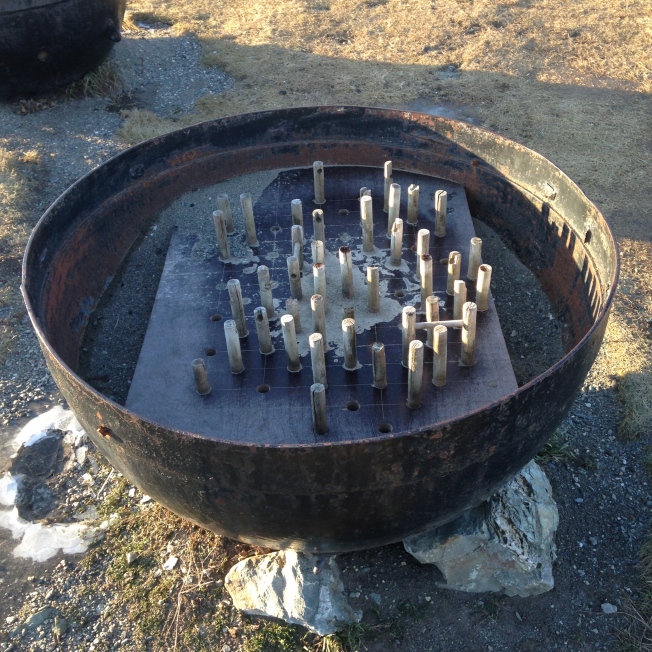 A local enjoying the view. 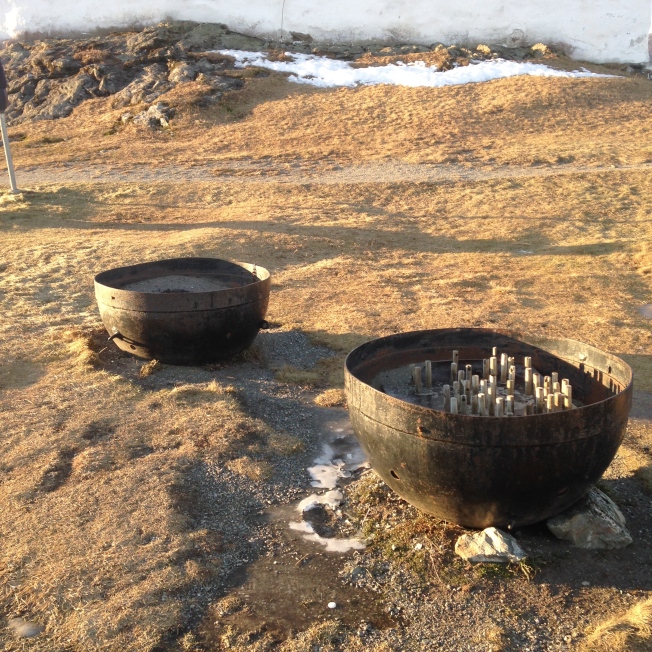 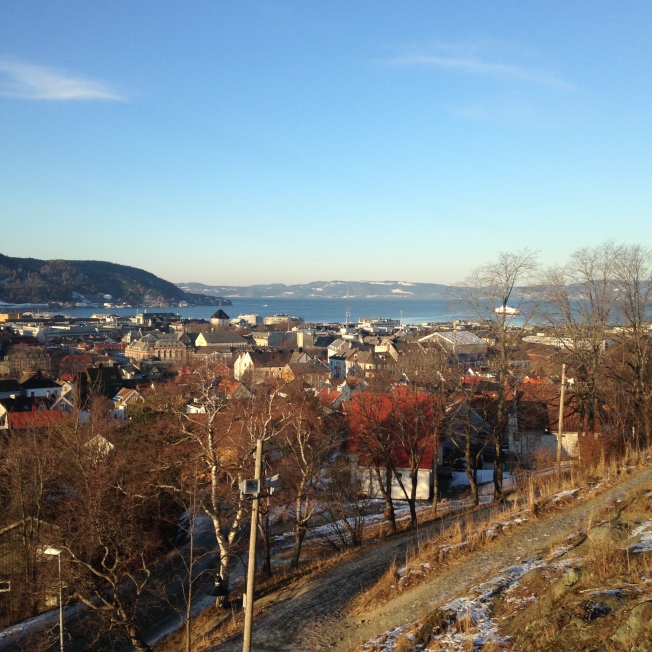 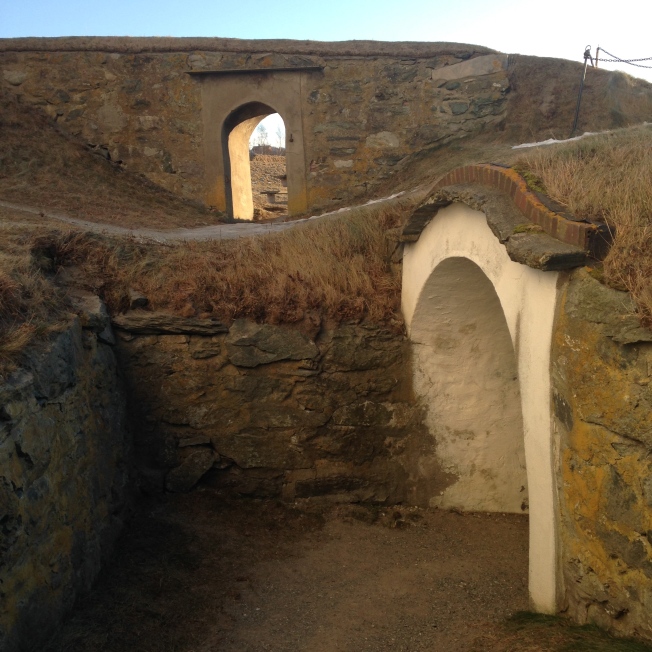 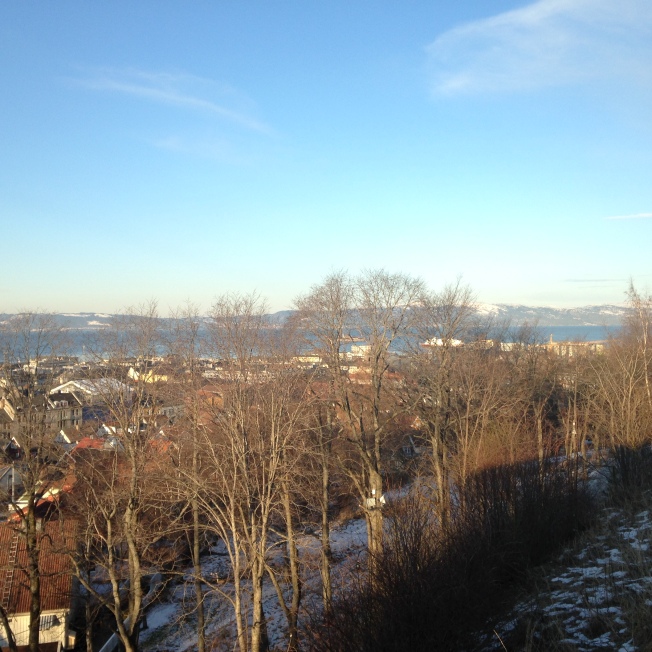 On my way there, with the Fortress in the background. 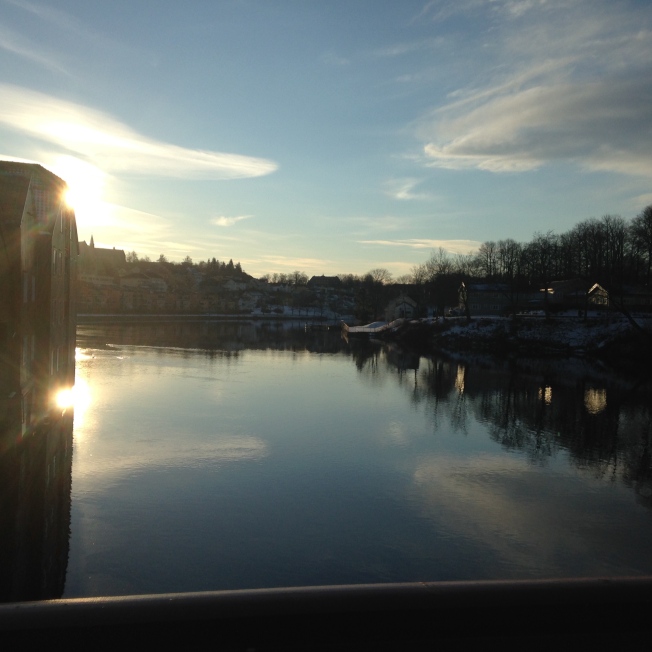 Down by the water, crossing the bridge into the city center. 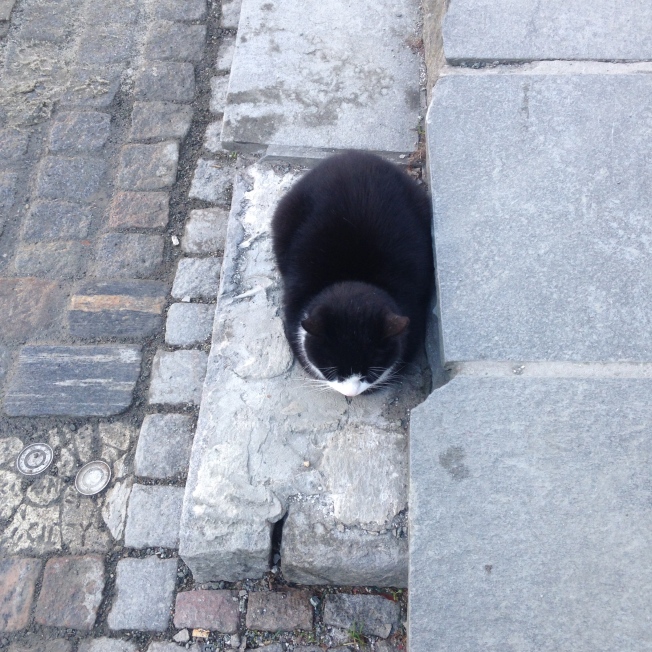 A friendly Norwegian. I miss my own kittehs terribly.