I fly from Trondheim into the Arctic Circle, to the city of Tromso. This trip is somewhat of a present to myself: I turn thirty-eight next Monday, and I cannot pass up the chance the see the Northern Lights.

I arrive and check into my lodgings, at which I’ll be staying for part of the week. I’ve divided my trip into budget travel activities (long wilderness walks, free/cheap museums and sites, grocery-store food), with a few higher priced adventures (dog-sledding, restaurants, beer). I’m staying at the Smart Hotel–hip and efficient, with micro everything, it is approximately the same size as my dorm room.

On the first night, I meet a colleague for a meal at Casa Inferno, a brick-oven pizzeria, with undertones of a Steampunk aesthetic. We discuss dissertations and magic, yoga and our parents. We lament the Norwegian male, who is a little unsure of his place in an egalitarian society, fumbling at flirtation, cautious not to offend. 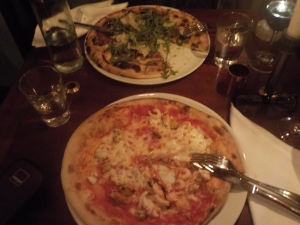 What is it about Norway’s obsession with pizza? It’s EVERYWHERE.

Afterwards, she takes me to a bar. It is in the basement of the old police station, which used to be the jail. It’s cramped, made of stone, warm, and full of university students. I make conversation about chasing the Northern Lights, hoping to see them at least once. The bartender suggests I drink them instead. They are delicious. 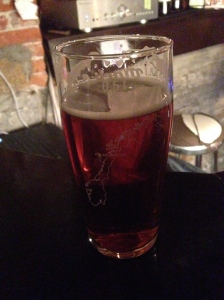 Near the end of the night, there is a Norwegian male standing next to me; he is bearded and blond, drinking and cool. I try to squeeze past him, as it is time to go.
“Oh, now I have to suck in my stomach!” He smirks, exaggerating with a sharp intake of breath.
“And here I thought Norwegians dispensed with chivalry, because you are all Viking Feminists.” He threw his head back, with a laughing roar, and in my mind’s eye I see him with an ax slung in a holster on his waist, drinking mead out of an animal horn.
“You just made my night.” He winks, and allows me to pass.

A little drunk and hoarse from conversation, I scramble back to my hotel in the cold and flop on the bed, already anticipating tomorrow’s hangover. As I close my eyes I notice the graffiti on the wall.

Thank you for validating my life choices.

I sleep until three in the afternoon.

Groggy, but with plans to hike across the bridge to take a cable car atop a mountain overlooking Tromso, I lug myself out of bed, don my wool underwear, and head out.

The small black dot is actually a duck. You can see the Arctic cathedral on the far right. 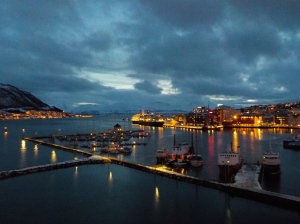 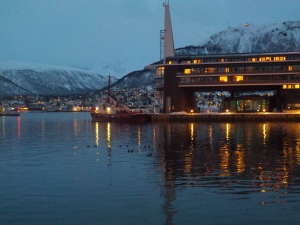 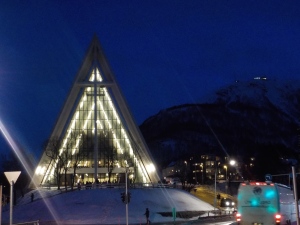 Finally, I arrive at the base of the cable car (getting lost along the way–my thighs are cold under my jeans). As we wait for the car, the operator lets me peak inside his booth, showing me the controls and pointing out how it works. Later, on the way down, I spot another young woman in the booth, smiling and laughing at his attentions. The sly dog.

On the way up I am among a group of middle-aged Scottish women. As the car lurches up with a start, one of them holds on tight to the bar, gives a little yelp (Oh Laird!), and tells her friend, “I don’t mean to be rude, but I am really, really scared right now.”
“Look at the floor and talk to me about something else,” her friend responds.
I am a head taller than all the ladies, and can easily look out the window as we ascend. The wind picks up, and it rocks the car a little.

At the top there’s a fenced overlook, and when you step outside the wind howls and rips at your clothes. I hold my camera tight, the sharpness nipping at my knuckles. 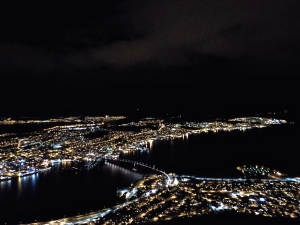 The view from up top.

After a few minutes among a throng of freezing picture-takers, I go back inside the cafe for a hot drink, a waffle, and to warm up after my long walk here. The Scottish ladies have a full meal with laughter. The Germans drink beer. The Asians play on their iPhones. I look out the window and write postcards.

When I’ve warmed up enough, I amble towards the descending car, but notice a back door. It’s unlocked, and I step out.

It’s dark. The sole light is behind me from the windows, and I’m staring at a snow bank six feet high. A trodden path is to my right and I hop up the bank and walk away from the cabin. In the daytime there must be people that venture outside, as the snow is trampled down enough to support me. But now I am totally alone. In the night. With the ground reflecting white, and the sky above angry, threatening to storm. I turn away from the wind, as it wants to push me along, edging me deeper into the night. It takes just a moment before I realize I am staring at a massive rising peak across a deep crevasse.
What did I ever do to you, Wind? That you’d want me to fall down the mountain?
Intruder, it tells me, why don’t you see if you can fly?
I do. For a few moments, at least, I picture myself lifting with the wind, up and over the Fjord to the next mountain peak.

As I wait for the return car I look out at the city. It is rather small, as cities go, but its lights are enough to obstruct any glimpse of the Northern Lights. It’s cloudy anyway, even if they were active tonight.

I wake up to large softly falling snowflakes outside my window. All afternoon the snow falls, and I wonder if they’ll cancel my Northern Lights adventure. I head out early to take a stroll before meeting my guide at the Tourist Center. 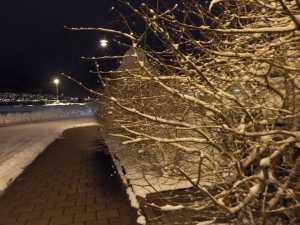 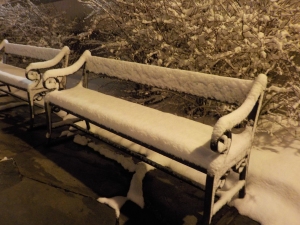 At six pm sharp my guide arrives. His name is Henrik, a Norwegian about sixty years old. He ushers me into a van with four other tourists. We drive to Vågen, in the Ersfjord, which is still part of the Tromso area. He owns a cabin on the coast, and hosts Northern Lights evenings for tourists. On the way, I have my doubts about visibility, and it’s still windy and snowing. 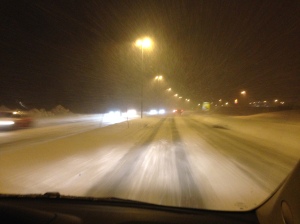 But Henrik assures us the weather will pass. Predict Aurora activity begins around nine. We arrive at his cabin, and all head out to have a look around. 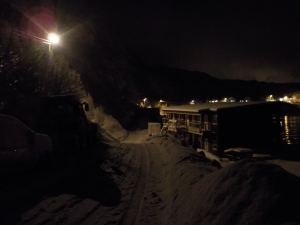 All the other tourists are professional photographers, and they drag their tripods out around the property, to the water’s edge and down the path, hoping the sky clears up. For the next several hours we chat, have food and hot drinks, alternating between standing out in the cold, and being in the cabin, looking at aurora forecasts. By ten pm everyone was inside, beginning to feel a little disheartened, discussing booking another night. I decide to go outside alone.

I am invigorated by winter. It is harsh and beautiful and isolating. Bundled in your clothes you know the creep of its cruelty; to enjoy it is to take all the necessary precautions.

Strolling out of reach of the street light, I round a bend by the water’s edge. The plowed path ends here, but there’s an untrodden path leading to a small unlit cabin. I wade through the snow, grateful for my high boots and wool socks. The sky is clearing, and the deep midnight blue sparkles with bright stars. More than I’ve ever seen. Orion’s Belt and the Big Dipper, but also hundreds (thousands?) more.

I am alone at the edge of the world in the deep night, the water gently lapping on the rocks.

A Norwegian friend recounted to me that his grandfather told him that if he waved a white flag, the northern lights would come take him away. I pull out my white handkerchief, and signal to the sky. Come on then, I tell the lights, I’m waiting.

Keeping my head back, looking up and north, I watch as the last of the clouds slowly clears away, moving east across the stars, over the mountain top.

Oh, so you’ve come for me! I’m delighted.

The others can now be heard making their way down the path. Within a moment they are within eyesight, trudging with their camera equipment towards my isolated spot, which is free from electric lighting interference.

For the next couple of hours we stand in the snow bank, taking, taking pictures, marvelling at the ever-shifting green wisps of light streak across the sky. I am told later that this was a four on a scale of ten in terms of activity. They are still spectacular, even at forty percent.

My own little camera captures nothing but black. I will have to rely on organic, not digital, memory. But here’s a photo of my hot jasmine tea sitting in a snowbank. 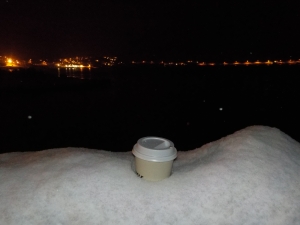 If you’re wondering what to get me for my birthday, why not make a donation to my Norwegian adventures via GoFundMe? It’ll buy me more woolen underwear.